Skype is a great communication app for making video calls. It is available for nearly any device with internet access, reaching more than 300 million users per month.

In the last few years Skype has made headlines for two reasons: its acquisition by Microsoft for 8.5 billion dollars and Skype’s replacement of Messenger. Today marks the service’s tenth birthday!

Skype’s origins date back 10 years to Estonia, developed by the creators of Kazaa, the well-known P2P downloader. The same Peer to Peer technology is utilized for voice calls, and even the origin of the name of the program: Skype is short for “Sky Peer to Peer”. 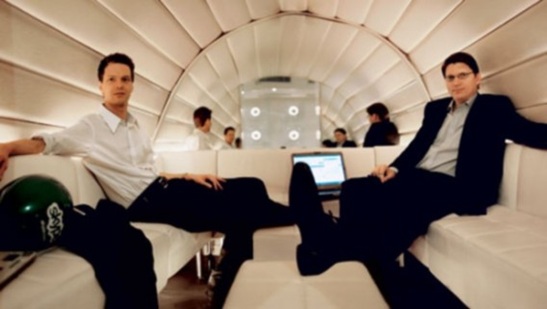 The first beta of Skype was an application able to make voice calls from PC to PC and little else. The original logo was purple. 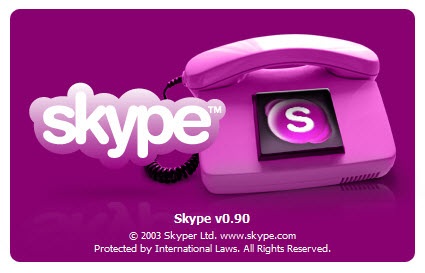 Skype 0.9 Beta introduced the concept of paying to use Skype to make calls to landlines, while trying to find the right color to fit the program. Successive versions varied their main color to finally settle on the blue by which Skype is known today. 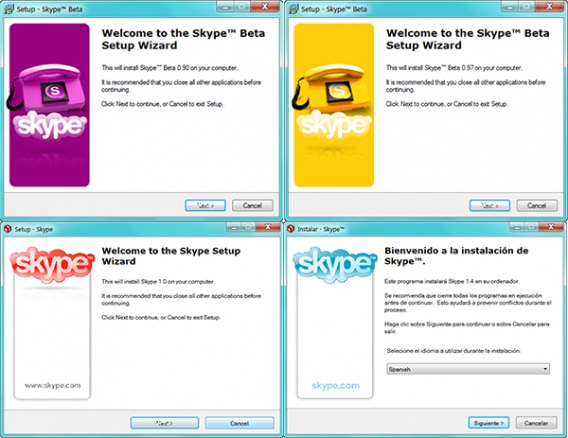 Version 2.0 was released for the first time in beta version in late 2005. It aimed to revolutionize internet calls again, first introducing video calling and a new design incorporating a more simplified interface.

This version was already very similar to Skype as we know it today. 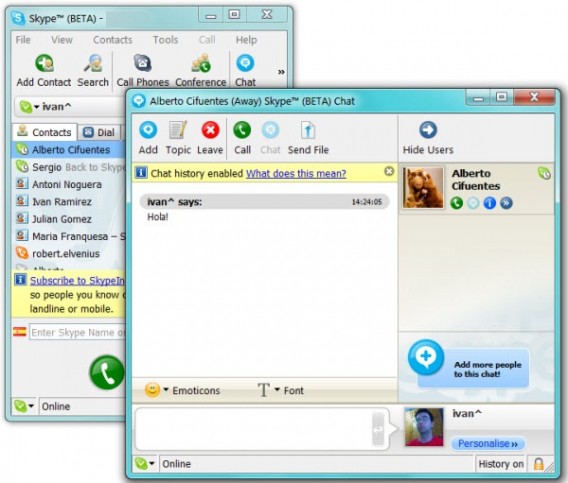 In September 2005, eBay bought Skype for $2.5 billion. The founders of Skype then concentrated on a streaming video service called Joost, which unfortunately wasn’t very successful.

During the following years, Skype continued to be updated, but the company didn’t flourish financially. eBay absorbed billions in losses for the company, and subsequently stated that they had overrated Skype.

Skype version 3.1 and successive apps became more social. It was no longer a matter of calling your family, but also of connecting with new people through the network.

Skypecasts were first introduced in May 2006. It was a service which could create voice conversations with up to one hundred participants. It worked like a chat room with a host who could control who could talk. 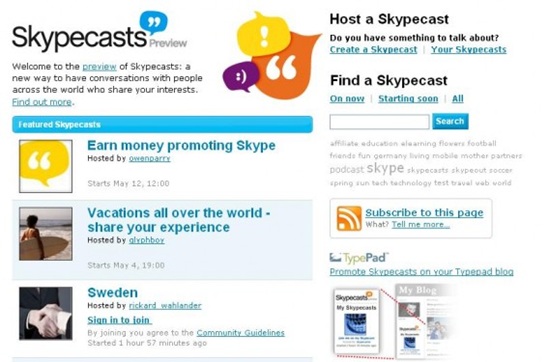 The service would stay active until September 2008, when Skype decided to close it permanently for not maintaining the expected minimum quality standard.

Other social functions were Skype Find and a directory of users. Skype Find, later simply called business directory, was maintained by the community of Skype users. You could find a local restaurant phone number and call from Skype. This was active until Skype 5.2. 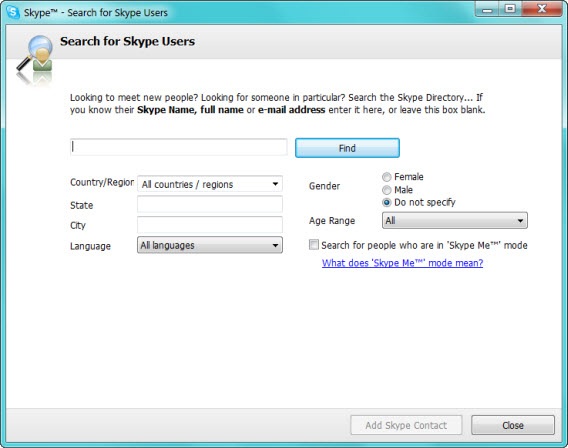 Back in those days the user directories allowed you to search for much more than you could today: you could search for users by age, region, sex and language.

Version 3.0 of Skype had pretty much everything we know about Skype, including extras: small plug-ins that added features and games.

In early 2008, the tension between eBay and Skype’s respective management teams resulted constant managerial changes and culminated with the departure of the company’s two founders.

Josh Silverman took over in February and put the main focus of the company on video calls. The result: many of the features of previous versions were discontinued (Skypecast, Skype Find) while version 4.0 of Skype allowed video calls in 720p HD. 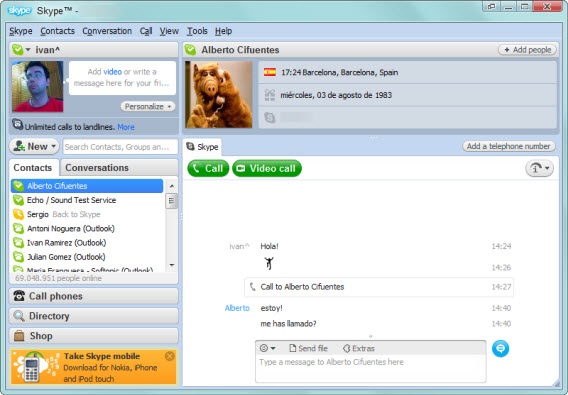 Main window of Skype 4.0, very similar to the current versions of the program

In 2009, Skype 4.1 also included the possibility of screen sharing and joined up with Boingo to offer wireless internet access through their access points (with a surcharge). It would later to be renamed to Skype and Skype Wi-Fi Access. 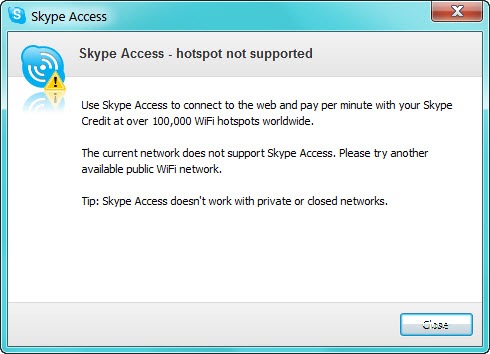 Expansion to all devices

In 2010 the versions of Skype for Windows, Mac and Linux were already very mature: it was time to jump to other platforms.

First it was Android, and then iPhone and iPad. Early versions allowed only voice calls (in some cases, only Wi-Fi and not 3G). It was not until December 2010 that video calls came to iPhone and June 2011 to Android. 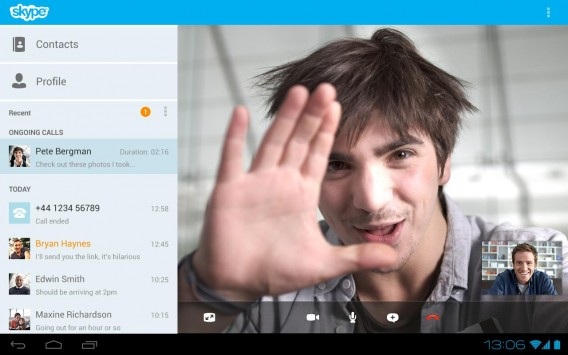 This expansion did not end there: Skype is one of the applications that has spread to many platforms: it’s available on PC, Mac, Linux, smart TVs, Skype phones and consoles.

In May 2011, Microsoft bought Skype for $8.5 billion. By then, the stable version of Skype for Windows was 5.3, with Facebook integration and group video calls. 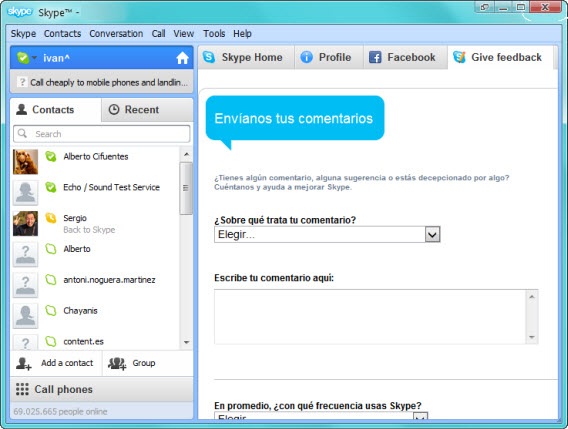 How it looked when Microsoft bought Skype (Skype 5.3)

The group calls and other functions were included within a monthly subscription package called Skype Premium. With a payment of about $4.99 per month, you could access to shared screen video calls and group calls, unlimited calls to a country, and an ad-free interface.

The news came in November 2012: Messenger would disappear and the main Microsoft messaging system would be Skype.

Since then, Skype has evolved, slowly, to cover the gap and replace the once-famous Messenger. The first change was obvious: allow login through a Microsoft account. The second: the inclusion of Bing Bar in the installer. 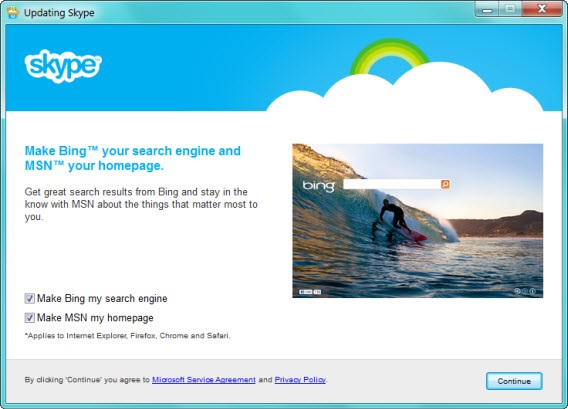 Skype has slowly adapted some Microsoft’s overall style. The first thing: a flat interface and the disappearance of icon highlights bring it in line with the rest of Windows 8.

The most current version of Skype today is 6.6 and although you can’t completely replace Messenger, with some patience it proves to be an efficient messenger with multipurpose network support (Skype, Facebook and Messenger).